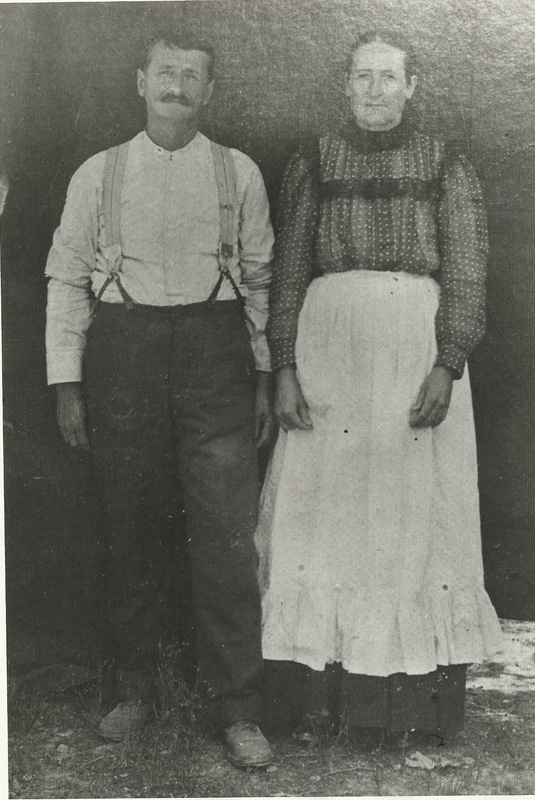 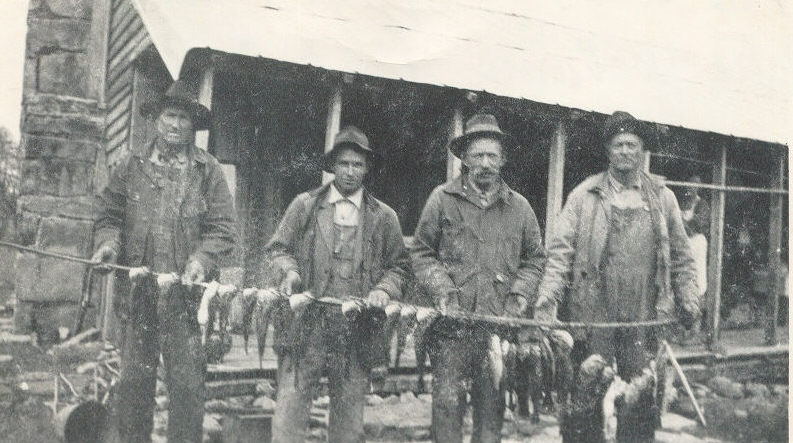 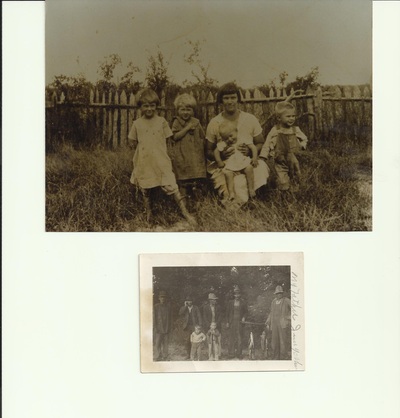 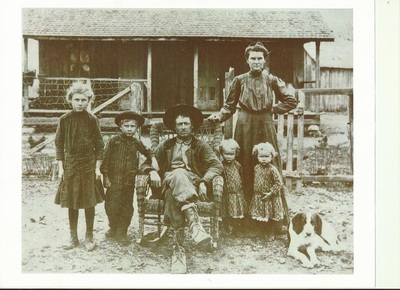 James and Edna(Chappell) Yocham with children Neva Yocham Brown, Lowell who was accidentally killed when he was 18. Twins Flora married Zerald Owens 3 of their children live around Lead Hill, Flossie married Bill Wallace they lived at George's Creek until their death. 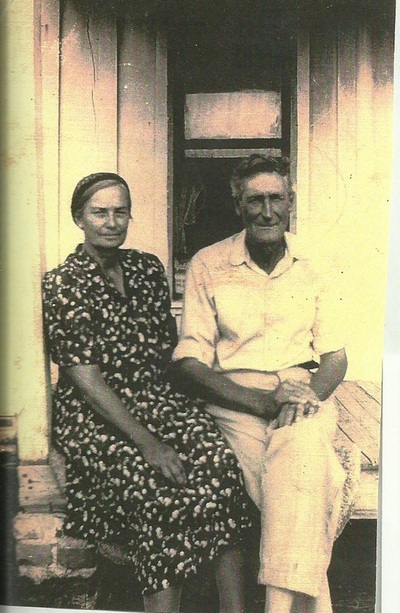 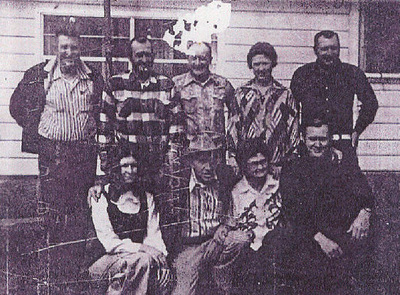 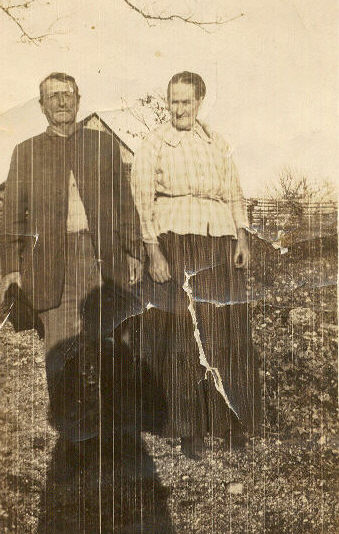 
THE LAST HOURS OF MIKE YOCUM
By S. C. Turnbo

One of the earliest settlers in Marion County, Arkansas, is Mike Yocum whose name we have mentioned so frequently in these sketches. Mr. Yocum had three brothers whose names were Jess, Solomon, and Jake. These four men had crossed the deep blue sea to America from Germany when they were little boys. At the age of 17 Mike was captured by the Indians and held a captive four years. At one time the Indians condemned him to suffer death by shooting him with arrows, but after the warriors had placed him on a block of wood to carry out his execution., the chief interfered in his behalf and saved him from a terrible death by shooting arrows into his body. These Indians had also captured a negro man at the time Yocum was taken. One day while Yocum and the negro were prisoners but were footloose, the negro and one of the Indian men got into a fight and the warrior bit off part of one of the negro’s ears. Some years after Yocum and the negro made their escape from the Indians., the latter finally fell in possession of Ewing Hogan, an early settler of Marion County, Arkansas. After the death of Ewing Hogan, Cal Hogan, son of Ewing Hogan, owned the negro. As long as Mike Yocum lived he loved old Ben the negro because they had been fellow prisoners and suffered together while in the hands of the red men. Ben lived until after the close of the Civil War and died at an extreme old age. In 1850, while Yocum lived at the mouth of Little North Fork and owned the mill there, he was a candidate for representative of Marion County. His opponent was Captain Henry, whose given name is forgotten. Both men were influential and had many friends which made the canvass hot. Ned Coker, who espoused the cause of Yocum, was one day talking with one of Captain Henry’s friends and during the conversation relating to the race between the two men, the latter remarked to Coker that "Captain Henry was a very nice man and ought to be elected." "Yes," replied Mr. Coker, Captain Henry looks nice enough, but he is a terrible liar." Mr. Yocum succeeded in defeating Henry and his friends rejoiced at the opportunity of sending him to Little Rock to represent in the legislature. When the war between the states broke out, Mr. Yocum sympathized with the south, but he was too old and feeble to enlist in the army. One day during the fall of 1862, he was arrested for being a southern man and taken to Springfield, Missouri, where he was imprisoned and compelled to suffer from disease and vermin until the following December when he was released. Sick and without money, he left the door of the prison house and walked and crawled all day. At night he found himself at "June" Campbell’s four miles south of Springfield. The poor suffering old man was completely exhausted. Exertion and disease had took away his strength and he was in a dying condition. He and Campbell were friends and when Yocum reached his residence, Mr. Campbell and his family did all in their power to relieve his suffering, but their efforts were unavailing, for in a few hours Mr. Yocum entered the great valley of darkness called death where there was no more fears of gloomy dungeons., starvation, and ill treatment. Ah, how much sweeter is death to the sufferer while in the hands of kind, loving friends than to have to pass your last hours while in the power of an enemy on the inside of a prison wall. Mr. Campbell, aided by his family, dug a grave on a knoll on his farm and here the mortal remains of this old pioneer of Arkansas was deposited. Thus passed away one of Marion County’s old timers and one among the best of citizens

PLENTY OF SUGAR AND BEAR MEAT
By S. C. Turnbo

On the opposite side of White River from the mouth of Shoal Creek in Crocket township, Marion County, Ark., is the old River Bill Coker farm which was settled by Jess Yocum. A-large number of sugar maple trees were on this bottom and in the bluff when Mr. Yocum came here and he and wife made plenty of sugar and syrup out of the sap of these trees. Yocum collected the sap from the troughs and vessels that he had placed under the spouts to catch the water in by using a one horse sled and barrel. During one winter season he and wife filled three 50 gallon barrels with nice cakes of sugar made from the sap of the sugar maples. When Yocum left here he was succeeded by Jack Nave, son in law of Ned Coker. One morning before breakfast while Nave lived here he shouldered his gun and started up to Ned Cokers on urgent business. He ‘had not more than got out of sight of his cabin when he spied a family of bears composed of a mother and three cubs. A shot from Navels gun and the old bear fell. The cubs stayed with their dead mother until the man reloaded his rifle and shot and repeated it again and two of the cubs lay dead at the side of their mother. After reloading his gun again he shot and wounded the other cub but it made its escape. This was bear enough for one breakfast spell and he postponed going to Coker’s that morning and he and his wife fell to work taking the hides from the game and dressing and carrying the meat to the house.

The following account was furnished me by J. M. (Jim) Yocum. My mother Mrs. Emiline Yocum was a daughter of Lewis C. Denison who formerly lived on the south side of White River near the mouth of Beaver Creek in Taney County, Mo. Mr. Denison had two sons Henry and George. The first named was a Methodist Preacher. My father Jake Yocum and his brother Bill Yocum were twins. My mother and her brother George Denison were also twins. My Aunt Eliza, wife of my uncle As& Yocum was a sister of my mother. You want to know where Buck Jones was killed during the war. He was shot on the north side of the river on what is now the Jim Shuer (Shewer) farm just above the mouth of Little North and near one half a mile from my fathers old farm on the opposite side of White River from the mouth of North Fork. My mother and Aunt Becca Yocum wife of Uncle Harve Yocum were among the women who buried him. They placed the body on a bed sheet and 4 of the women held a corner of the sheet each and one at each side and ends or 8 women in all and they carried it to the river and placed the remains in a canoe and took them to the south side and lifting the body out of the canoe and carried it in this way to the grave yard on my fathers farm where they dug a grave as best they could and wrapped the dead body in the same sheet they carried it on and lowered it into the grave to await the coming of the great clay of the resurection and in the meantime to rest from the awful bloody conflict that was raging so fiercely between the American people. It is sad to pen down the incidents of such horrors yet it is proper to prepare a history or record of those bloody deeds and the good conduct of the brave hearted women.