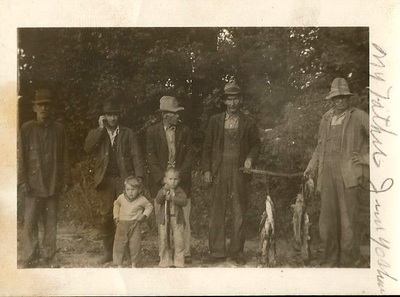 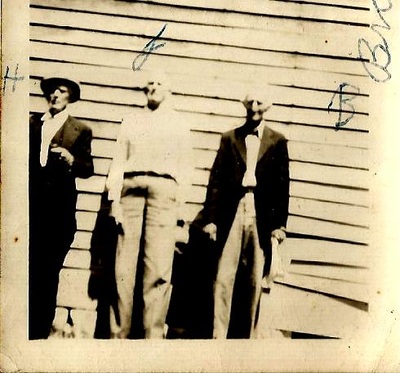 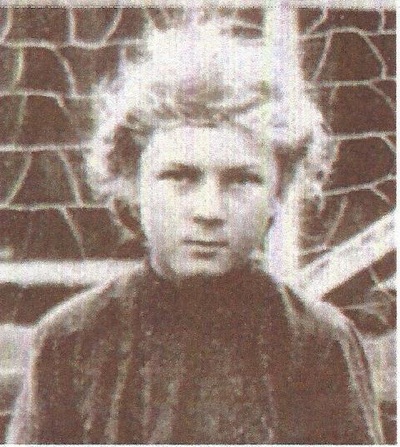 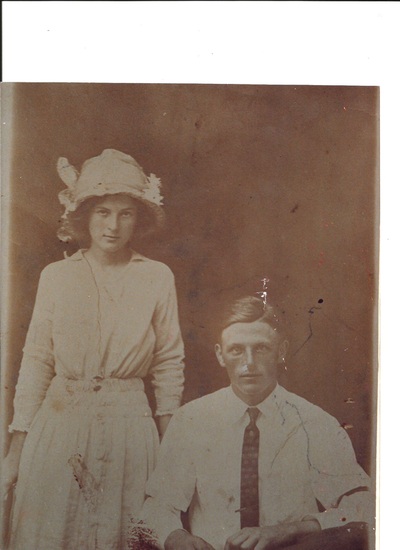 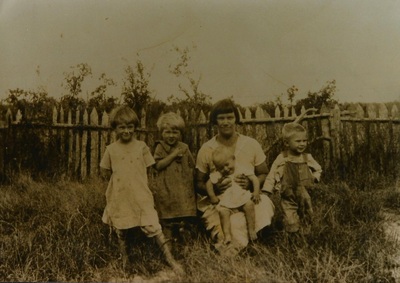 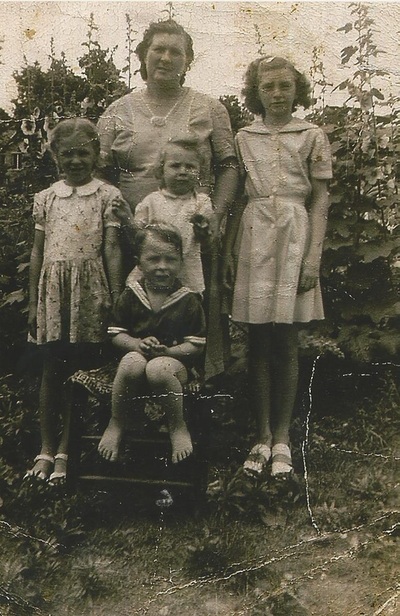 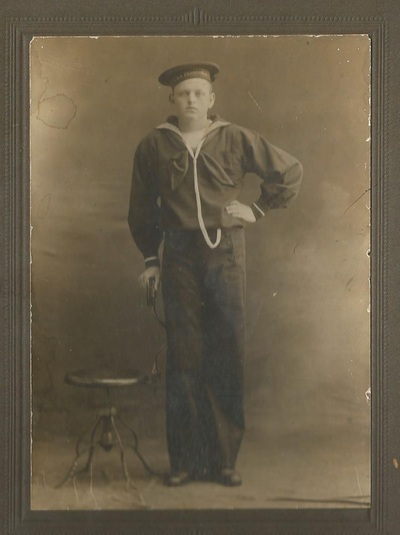 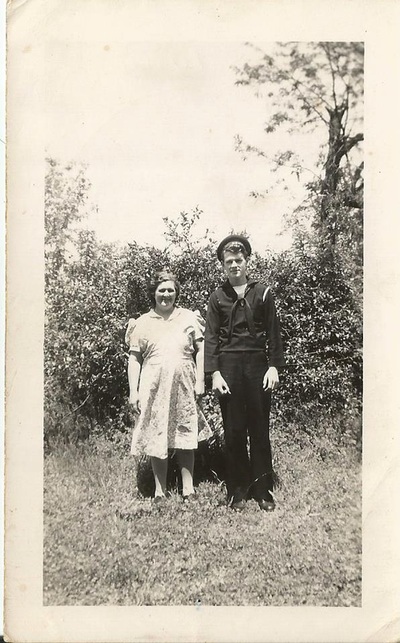 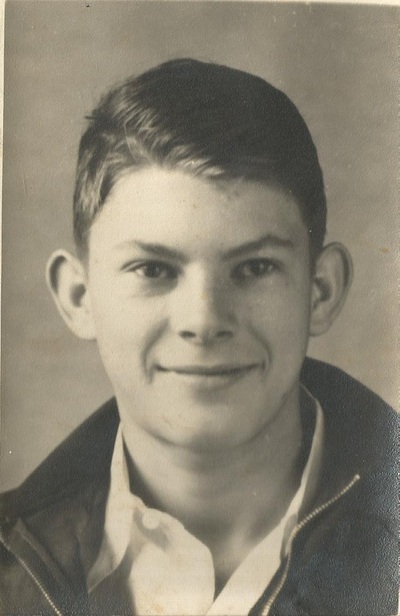 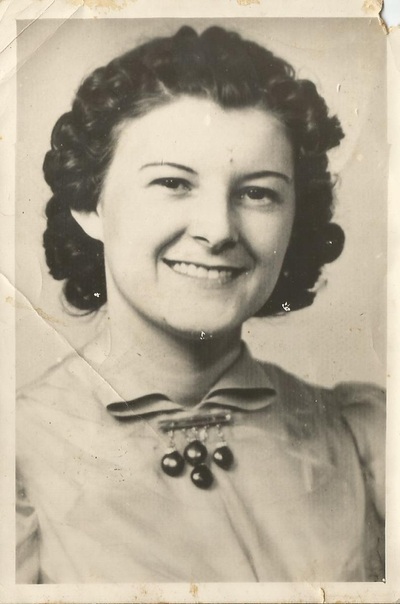 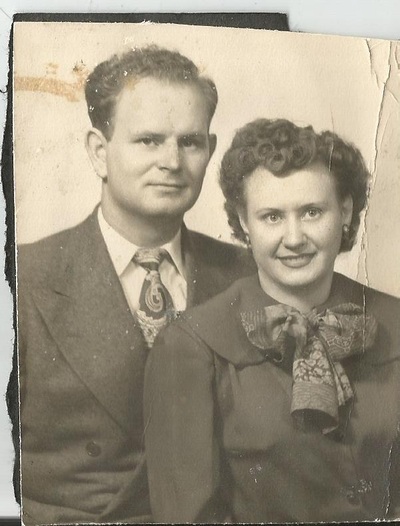 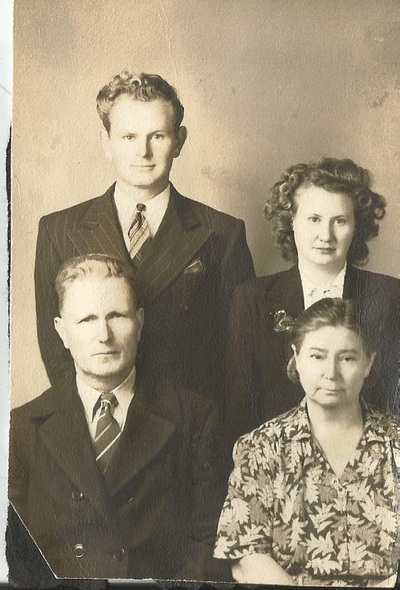 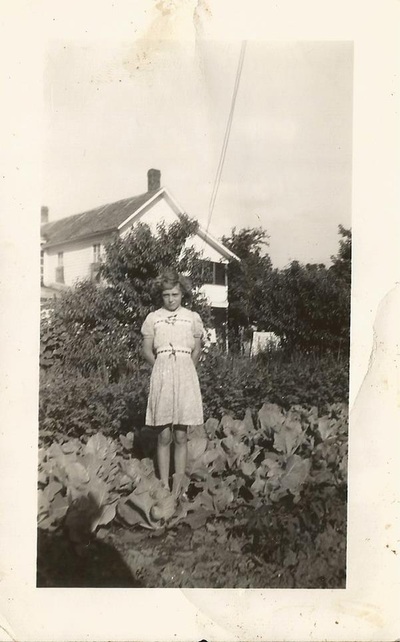 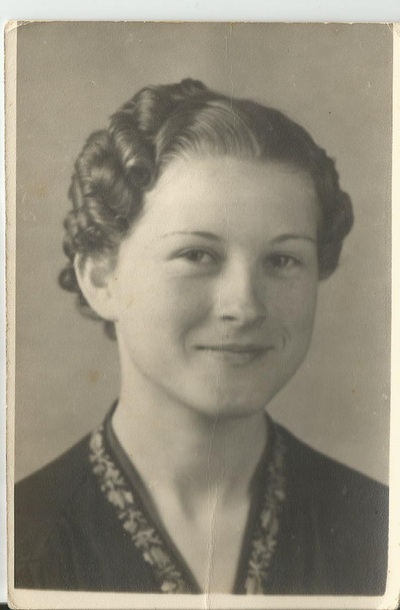 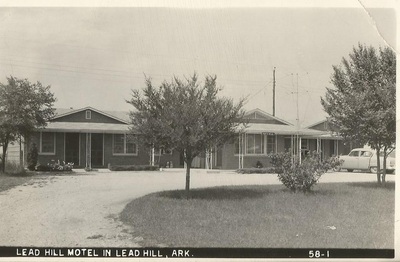 Motel run by the Brown family in 1958 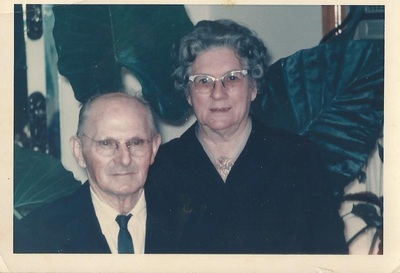 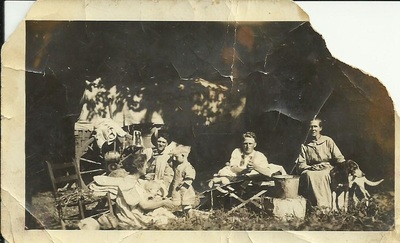 Clay and Neva Brown and Family Camping on the White River 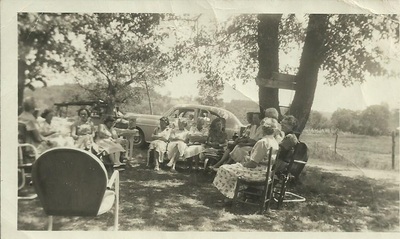 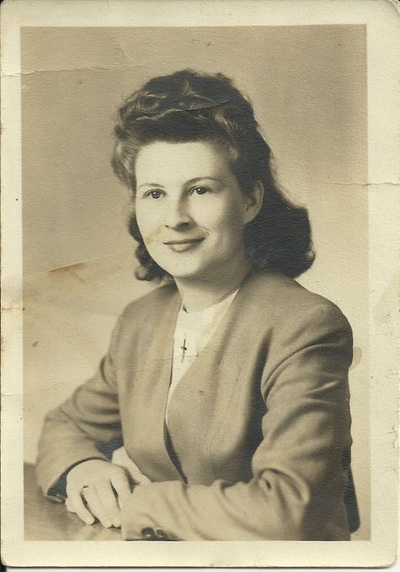 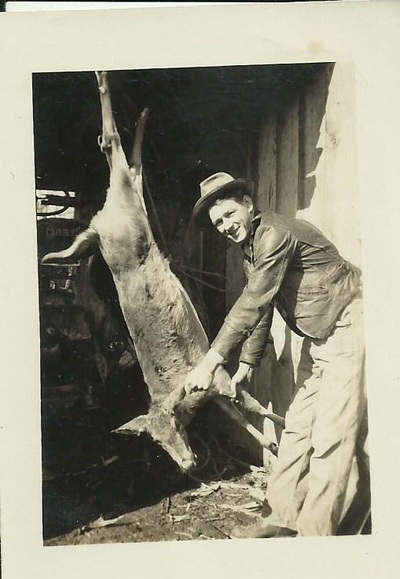 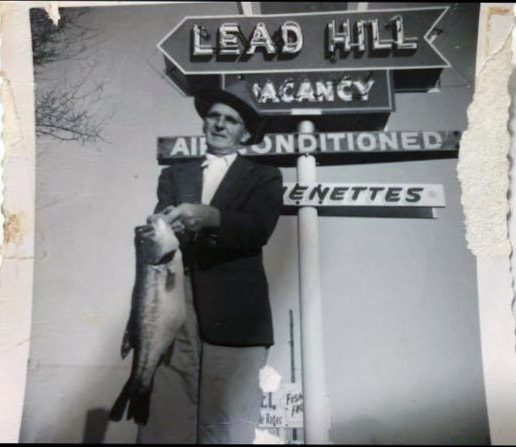 Albert Clay Brown way back when!
BROWN FAMILY STORIES
THE KILLING OF WILSE BROWN-By S. C. Turnbo
Just over the line In Cedar Creek Township in Marion County, Arkansas, is a little glade on top of a hill where an old trail leads over it from the lower end of the Panther Bottom to Big Creek. Another trailway leads from the old Magness Bottom across this path mentioned. The two trails cross each other near where there is a flat rock or low ledge. When the war between the states began, a man of the name of Wilse Brown lived on the right bank of the river just between the mouth of Trimble’s Creek and Becca’s Branch. In a year or more, Brown moved to Big Creek and lived on the Hugh Magness land known now as the Fately Place. Brown’s wife was named Margarette. Her father’s name was Ale Corn. Their oldest child was a girl and they called her Betsy Ann. Their next oldest was a boy named John who died soon after the close of the war. The next oldest child was a girl named Susan. Their baby was a boy and they called him Willie. While Wilse Brown was living on Big Creek, John Anderson, a brother of Archibald and Pew C. Anderson, lived on, the right bank of the river opposite the Panther Bottom. After Brown had moved to Big Creek, he soon reached the conclusion that it was the best for him to be on the south side of the river and decided to move across where Andersons lived. And one evening while the river was past fording, he procured a small dugout canoe and went over to Mr. Anderson’s for help to move and Anderson agreed to assist him to move across the river, and they were both to cross the river on the following morning in the canoe at the mouth of a deep rough hollow that empties into the river just below Pine Hollow. It seems that a scouting party of federals were watching for this appearance and some of them were concealed behind a large rock that lay on the bank of the river just-above the mouth of the hollow, and which was near the canoe landing, and when the two men in the dugout reached the shore from the right bank, the men lying in wait captured them. They were both taken on surprise and when the enemy ordered them to surrender, they could do nothing but give up at once. Their captors conducted them to the top of the bluff and on to the glade where the trails crosses each other, where they rejoined the main force and halted their prisoners and accused Brown of stealing two cows from Mr. Isaac Mahan, who lived on Little North Fork, which the man stoutly denied. At this one of his captors knocked him down with the breech end of his gun. The blow was a severe one, but it was not hard enough to stun him. Mr. Brown’s temper rose to a high pitch and without regard to his helpless condition as a prisoner, he rose to his feet with a rock in his hand and no doubt would have hurled it at the man who struck him, but before he had time to deal his assailant a return knock-down blow, he was shot dead. As Brown fell to the ground his left leg doubled up under him. They left the body where it fell and went on with Anderson and sent him to Springfield, Missouri, where he died in prison. Just before Mr. Anderson’s death, he contrived to smuggle a letter to his family which described how he and Brown was captured and the full details of the death of Wilse Brown. On the following day after Brown was shot and killed, Mrs. Jemima Carebolt and two of her daughters, Jane and Lucinda, and Brown’s wife and her children found the dead body. It was evident that they would have to obtain assistance to convey the body to a place of burial and some of the women notified Mr. Calvin Clark, who lived on Big Creek and he come and brought a big ox sled and yoke of cattle, and Mr. Clark and the women placed the dead body on the sled and Clark hauled it to the top of the bluff overlooking the upper part of the Joe Magness Bottom where it was taken off of the sled and carried down the old trailway into the upper end of the Bottom, where they dug a shallow grave in a thicket and the dead man was buried without a coffin and in the same clothes he was slain in. They made several ineffectual efforts to straighten his left leg and they were compelled to bury him with the leg doubled up under him. Many years afterward this land was put in cultivation and in the course of time the skeleton of a man was plowed up in the upper part of this bottom which was no doubt the remains of Wilse Brown

arrollton, Arkansas, attracted Coker men. In the Territorial years of Arkansas buffalo and elk made a trail there to taste the saline dirt. Buck Coker's grandson Len and Great-grandson Joe frequented the lick and Turnbo reported a deer kill of 40 each in one fortuitous day. These skins would have paid for taxes, land, stock, or manufactured goods at regional mercantiles.

Joe Coker was the "Mr. Coker" whom Henry Rowe Schoolcraft (1793-1864) mentioned several times in his Journal of a Tour into the Interior of Missouri and Arkansas in 1818 and 1819.

In July, 1861, volunteers for the Confederate army were called to Yellville. A company of men raised in Marion and southern Taney County responded. Captain William C. Mitchell, long-time successful politician in Carroll County, commanded the group which later formed part of the 14th regiment of Arkansas Infantry. The soldiers marched through the streets of Yellville accompanied by the violin music of Dan and "Yellville Bill" Coker. But by war's end the grim toll in lives and property had stunned all. Ned and River Bill Cokers' houses were burned, Ned was tortured with fire and hanging. Both father and son died in Missouri. In spring, 1865, Bushwhackers shot and killed "Dud" Coker while he planted his spring corn. Fortunately, patriarch Buck Coker, who died in 1855 nearing 90 years of age, did not see the years of Civil War. Like numerous slaveholding southerners, the War destroyed their property and they lost lives and futures in the Great Conflict